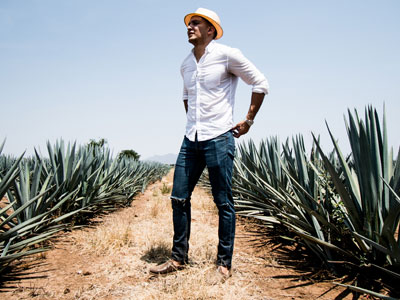 What do you love most about LMU?
Intimacy and the relationships I was able to develop with my teachers. To this day I still have a lot of significance memories about how close I was able to get to the teachers. The fact that it wasn’t this huge auditorium type of classrooms, is what I think was a game changer for me and my career. It made all the difference, especially because I think that I never did stuff conventionally even in HS, and the fact that I was really able to really engage with professors – THAT was my favorite part of LMU.
The gym was dope too!

What keeps you connected?
The people that I work with. I work with an LMU alum artist – Kelsey Fisher. Working with the people that went to LMU – my best friend is from LMU, he’s actually in the film industry, he’s making an urban clothing line called DFND and I work with him – so the people, the students it what connects me to LMU more than anything. I use everything I gained there.

Why are you proud to be a Lion?
I think the identity of what is LMU is something that is very familial, very rigid in a sense that it is disciplined and it’s almost like an organic way of demanding excellence. That’s what makes me proud b/c I know that the environment that we were all in was something that wasn’t just nurturing – I got better grades in my hardest classes … just cause, if you’re not really demanding anything of me, if it’s not challenging, I’m not going to perform well. I’ve just always been like that – & some of my hardest teachers, she was a hard ass, but it was so organic, it was so genuine, it was so much passion that I was just drawn to it and it made you want to achieve that much as well.
So that’s what I’m most proud of, I’ve most proud of the way it challenged me.

If not a lion, what animal would you be and why?
A Wild Boar. I would be a bull (los toros) or a wild boar. A wild boar because sometimes, I think something about tusks/horns – I’m very competitive, in the best way – the reason I say in the best way is because I really want you to be at your best and I really want you to challenge me. & I enjoy when I get beat because it’s like damn, I didn’t see that and that’s where I can grow. So it’s almost like I love the struggle, I love the… sometimes using sheer force. There’s many times when this thing (Tequila CABAL) should’ve “crashed.” I’m a luxury tequila, my main focus was high-end restaurants. Both hardest hit during COVID, I had to re-change my entire thing. When it get’s harder, I perform better under more stress, it’s weird. My name “Everard” is Teutonic (german) meaning wild boar. So I just identify with a certain ferocity, but also a sort of calmness. Sometimes you just see them kind of like contemplating, calm. One of my favorite books was Fernand the Bull. Where he would just be this insane, powerful creature… but also sit down and smell the flowers man. So I enjoy both, so I think that’s why I relate to both of those animals. The Wild Boar and The Bull, Los Toros.

Funny memory that comes to mind while you were on the Bluff?
When they first opened the library and we went in there – don’t hold me accountable for this – we were in the library and we were all using erasable markers. One of my buddies, we were all working on a script, and we were in there and writing plot lines, and all kinda stuff we were using – this dude, is using a freaking sharpie. And he literally painted half the wall, so I was like… dude that’s a sharpie! He’s like “so?” & I’m like, “that doesn’t come off!” – so immediately we’re like “oh sh*t!” & we didn’t even erase anything, we were just gonna leave everything up and we bailed, & we went to another room and pretended it never happened.

What’s the most valuable skill you learned at LMU?
Tenacity. Tenacity & also networking.

Advice or words of encouragement to recent graduates we’re welcoming into the LMU Alumni Association?
Hindsight is 20/20 – with clarity I can say that, it really does matter what you really want to do and what is the most thing that brings you passion. & you just have to start with something that you like, turn it to something you love, so that you can create something that you adore. It should envelop you. The one thing I would advise them, at the end of the day – you do your own research, you do your own due diligence, you be true to yourself and do good. Really focusing on the people around you, supporting the people around you, and finding your passion is what it really breaks down to. Excuse my French, but work f*cking hard. Work you’re a*s off. Never be afraid to fail. You’re going to fail – you’re going to fall hard on your face. But the falls won’t kill you.
Just because you’re not where you want to be, doesn’t mean you can’t start being who you want to be every day. Be who you want to be every day – it’s day by day, it really is – just start! You’re going to mess up, you’re going to make mistakes, but guess what – you’re going to figure out how not to do that. Fail fast, fail hard, learn quick. That’s what helped me the most. Take the L’s and make them into W’s – you’re going to fall, but you have to get creative with how you fall.

How did your business originate?
Son parientes de la familia (they’re relatives of the family), my dad’s sister married into the family & extended family. They’ve been together since before I was born, so I always knew about tequila and it was always something that was sipped on these glasses (small copita, 4-5oz glassware) and we always had sangrita, which is the ginger to your sushi. Which is the CABAL way, essentially it’s for sipping.
It’s a palate cleanser (the sangrita), so you sip on [the tequila] neat, then you sip on [the sangrita], then you go back to it. We never shot [the tequila], it was never overly drank. I remember my uncles always cracking up in the corner, it was always very lively and it was always positive. Nobody got sh*t faced – I encountered all that in college. I was like, “así no te toma tequila.” It was odd. & then later on, I had all these people telling me what I look like. These guys being like we’re Casa Amigos, Dos Hombres, all these celebrities kind of tequilas coming up with very shallow interpretations of what it really is and it’s almost at a very social/superficial level, and it doesn’t go anything into what it actually means to the people that do it – it just felt like a slap in the face. A lot of the ideology and the class was lost in all these celebrity tequilas and I was like, “you know what? Es tiempo que les enseña what it really is. I loved our product, I always thought it tasted a lot better than everything else. & I was going to import it in bulk, but I thought if I was going to import it in bulk, I might as well have my own label. So in March 2014, I started crafting it and I came up with CABAL, I came up with the horse, and I came up with everything – the ideology, the mantra, and everything. So it was because there was a void of authentic cultural ties.
It’s time that I not be told what my culture looks like and show you what it really looks like. Don’t get me wrong, I want to share it with everyone, I think everyone shares it with everyone. I think there’s a lot lost when I don’t show you what it really means – you’re missing out. Because it’s not just juice, it’s not just tequila. It’s why and when and who we drink with.

Preferred way to take your beverage?
The best way – and I challenge anybody to say otherwise – is neat, room temperature.

Where can we find your beverage locally?
Los Angeles, CA - Buzz Wine & Liquor (4th & Spring in DTLA)
Las Perlas (a bar)
Lincoln Fine Wines (Lincoln Boulevard, a couple miles from LMU)
You could also find us on caskers.com and cws.com (country wine & spirits)

Favorite local happy hour spot/restaurant while at LMU?
The Edison in DTLA – I spent my 21st birthday there.

Song you currently have stuck in your head on repeat?
If you can tell, one of my favorite things is [the color] black – & I have a whole playlist of songs with black/about black.
Song: Everything Black by Mike Taylor