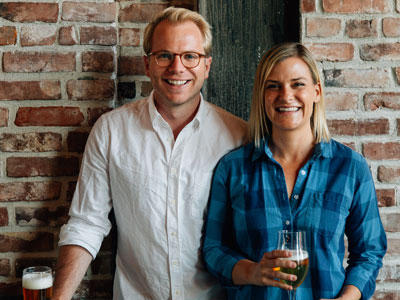 HAL MOONEY ’09
Co-founder, with his wife Cindy Mooney ’07,
of LA Beer Hop and Your Beer Friend

What do you love most about LMU?
The community. That’s an easy answer. It extends to the beer community that I’ve been in and I know a bunch of LMU grads who work in beer. So I am able to connect with people that way and I know we all have a common understanding of doing good work and doing it with and understanding and perspective of social justice as much as we can. & trying to operate within Los Angeles – I love Los Angeles, the city. So it’s about connecting with people with a shared understanding of how to operate a good business in the city of LA.

Where are you originally from?
Illinois – but moved out to Los Angeles when I was 12; from Whittier

What keeps you connected?
I was in a fraternity when I was there – I was an Alpha Delta Gamma (ADG) and I’m still good friends with a lot of those guys, obviously; Beer connects a lot of us nowadays.

Why are you proud to be a Lion?
Oh man… The kind of people it attracts and also the kind of people the school puts out are of a certain caliber across the board of people I want to be associated with. That’s such a nice thing to be able to attract the right people, but also develop people to a thing that everyone is proud of being.

If not a lion, what animal would you be and why?
There’s a big part of like the beer culture that revolves around goats – a strong goat. It’s called a BOCK (German) Like Shiner Bock – it’s named after a strong goat

Funny memory that comes to mind while you were on the Bluff?
I was doing a beer tasting for a couple of my fraternity brothers and we were talking about beers and having fun as I was guiding them through this tasting, and one of em said, “hold on now… I remember when you had your first beer, while we were students and you hated it. It was not a flavor you liked, and I was like… yeah man, I’ve come a long way.”
It was totally an acquired taste – I use to be a gin & tonic guy. Because it just tasted sweet with a bunch of lime in it. & then all of a sudden I was like, I gotta work on this beer thing because I can’t afford drinking gin & tonics the whole time. So I developed a taste for it and I kept developing a taste for it and that’s where I am now.

What’s the most valuable skill you learned at LMU?
Technical skill = excel; as a small business owner excel is absolutely a backbone to what I do; it’s not really an exciting answer.

Advice or words of encouragement to recent graduates we’re welcoming into the LMU Alumni Association?
To the Classes of 2020 + 2021, attend programs that LMU offers like What I Wish I Knew earlier this summer?
Remember, it’s a long haul, you don’t have to come out of the gates sprinting. Enjoy your early years, take time to develop your personality and interests in that time in your early 20’s because there’s a lot of fun to be had AS WELL, as a lot of work to be had.

How did your business originate?
Ug happy hour h… I sold my car, and I bought a bus. And I started doing brewery tours on nights and weekends. There were 9 breweries at the time in Los Angeles & then slowly, my wife joined me and then we actually have another LMU grad working for us – he was our 3rd hire. & then low and behold, we now have a small fleet of buses, we do virtual tastings, so it kind of grew that way – very organically, very slowly, and it grew on pace with the craft beer community as well; now there’s over 100 breweries in Los Angeles. So we’re just trying to keep up with the growth of beer.

What was the first region you did?
1st brewery tour: Monkish (LMU Professors), Strand Brewing (Torrance), and ESB (third stop).

How many buses in the fleet?
3 buses and the trailer, we’re just about there with the launch of the trailer.

Favorite Beer:
Oh man… that’s an impossible questions. There’s no favorite… Im just excited to drink beer. In general, I like what’s local. I love traveling to beers to find beer in its surroundings. Beer is so much about set and setting – how it’s served, where is it served, what is it about? Who’s serving it to you? My favorite beer is the one that… IDK, I just like beer!

Where can the people find LA Beer Hop?
You can come on a brewery tour with us – it’s the classic way. We also have a beer subscription box called “Your Beer Friend” and that’s beers delivered to your door, monthly, that are curated by us – so they’re rare, hard to find, interesting, and obviously super delicious beers. & then we have virtual beer tastings… and then eventually we’ll have our trailer.

Favorite local happy hour spot/business while at LMU?
The Shack – down by the beach, in Playa; it’s a dive bar and karaoke beer

Favorite/highly recommended beverage-n-bites pairing for a happy hour?
One of my all-time favorite beer pairing is a West Coast IPA with Carrot Cake; I don’t love bitter beers – which is kind of shocking for someone who works deeply in the beer industry. W/C IPA’s are very bitter, it’s a very signature component of it. So one way to offset the bitterness of it is to pair it with something sweet. & I love carrot cake, carrot cake is naturally sweet, so it makes the beer taste more fruity, it dulls the sweetness a little bit on the cake, but the cake tastes a little more spice and fruit forward – so it’s just one of those pairings that makes both things taste WAY BETTER at the same time.

Song you currently have stuck in your head on repeat?
"Midnight Train to Georgia" by Gladys Knight and the Pips